At Peak Performance we are committed to the development of nutrition professionals in the science and application of clinical sports nutrition/dietetics. Each year we offer exceptional Dietetics students a 10 week University Dietetic internship in clinical and practical sport nutrition in partnership with the Athletics Department of Carleton University. These Ottawa based internships offer unique opportunities to get hands on work with different types of athletes.

For the 2019 University Fall season an Academic All Canadian volleyball player from Ryerson did her Peak Performance Dietetic internship working with Carleton University’s women’s hockey team to get them powerfueled for health and performance! 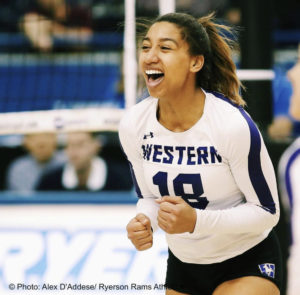 Aja joined us from Ryerson University, but her varsity athlete status belongs to Western University where she played on the varsity women’s volleyball team for four years while receiving an undergraduate degree in nutrition and dietetics. As a volleyball player she helped lead her team to four consecutive medals at the Ontario University Athletics’ provincial championships and was also named OUA All-Star in 2016 and 2017. Aja also led off the court by being named an Academic All-Canadian 2 years in a row, and was vice-president of Western’s athlete student council. Aja has represented Western University, Ontario, and Canada on the national and international stage and is currently committed to giving back to the volleyball community by coaching elite high school athletes. In her spare time she runs an evidence-based nutrition social media account which can be found at @AjaMadeYa on both Instagram and YouTube.

Victoria obtained a Bachelor of Science Honors Specialization in Nutrition and Dietetics (2013), Bachelor of Arts Degree in Kinesiology (2014), and a Masters of Arts Degree in Kinesiology Management and Leadership Coaching (2016) from the University of Western Ontario. Growing up Victoria was involved in soccer, competitive dance, and most recently lightweight varsity rowing. During her graduate studies at Western, Victoria worked as the strength and conditioning coach with the varsity rowing team as well as coaching the junior varsity women’s team.Victoria recently completed her dietetic practical training and is currently working towards obtaining her license as a Registered Dietitian. Victoria is committed and dedicated to living a healthy balanced lifestyle herself as well as motivating and supporting the goals of others in attaining optimal performance, health and well-being.

Marcela Simoes is a Dietetics graduate (December 2016) with a Minor Degree in Kinesiology from McGill University. Her main passion is, and has always been, Sports Nutrition. Marcela has done an internship with the Brazilian Olympic women’s Basketball team, the Brazilian Paralympic Goalball team, the Brazilian Arm Wrestling association and a first division Brazilian Soccer team (Associação Atlética Ponte Preta). During her whole life Marcela has always been involved in many sports. She competed in Equestrian Jumping events for 8 years and now participates in many Golf tournaments.